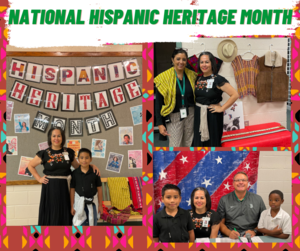 In 1968 Hispanic Heritage Week was established under President Lyndon B. Johnson, an educator long before becoming the 36th President.

In essence, LBJ was the first ESOL teacher in history. He admitted he didn't speak any Spanish, and many of his students didn't speak English. His experience teaching Mexican-American students was the catalyst to education policies he signed into law while President.

In 1988 President Ronald Reagan expanded the week to include 30 days beginning September 15 through October 15.

Why September 15th? This date is significant as it is the anniversary of independence for Costa Rica, El Salvador, Guatemala, Honduras and Nicaragua. Mexico and Chile celebrate their independence days on September 16 and September 18. Columbus Day or Día de la Raza, which is October 12, falls within these 30 days.

According to Mrs. Smith, the display highlights famous Hispanic Americans. Smith said, "We look forward to a month of celebration to honor the history and cultures of these Hispanic countries."

Buford Middle School also has school-wide activities coordinated by the English as a Second Language Department.

The students research the location, landscapes, food, customs, and other interesting facts of Hispanic countries and will present their findings in class. Misely says part of their research involves a school-wide survey.

Misley explained, "We are asking students/teachers/custodians/cafeteria workers with Hispanic backgrounds to add a tally mark to our What is your Heritage? wall. In the end, we will see which country has the most tally marks."

BHS launched a contest for students to celebrate National Hispanic Heritage Month. According to Dr. Amber Simmons, students can enter the contest to create a reflection piece; it can be original artwork, literary, an original dance, or musical composition.

All submissions must be in by October 15. Monetary and gift card prizes will be awarded to contest winners.