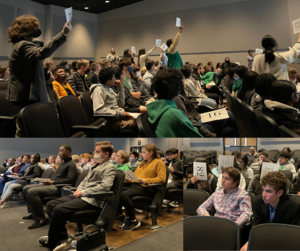 According to BMS teacher Susan Oates, the 8th-grade social studies teachers teach the required state government unit during the actual time our legislative branch, The Georgia General Assembly, is in session each year.

Oates said, "We teach the students how a bill becomes a law, and then we model the process with students, where they then act as members of the General Assembly."

Students were also encouraged to dress professionally as members of the General Assembly would for work.

Oates explained, "The students create a topic, write a bill, and then debate their bill in small committees. From there, students gather in a large gathering that we call a Mock Assembly where four to five social studies classes come together to debate certain selected topics and work together to try and get bills passed or killed."

The Mock Assembly is one hundred percent student-led, including assigning the roles of representatives, senators, speakers, and doorkeepers.

Students even adopted the customary introductions of new attendees to the session by announcing the individual and standing to greet the newcomer.

Oates shared, "It is remarkable to watch the students go through this process. Depending on the class period, students may start as shy, but usually, by the second bill, students are actively engaged, debating, asking questions, and voting to pass or kill the bill. It is a very rewarding day for both students and teachers alike."